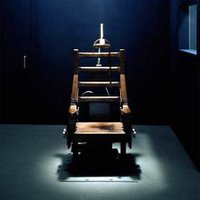 Is the guy who flips the switch to turn on the electric chair a murderer?
- August 11, 2006
Email ThisBlogThis!Share to TwitterShare to FacebookShare to Pinterest

No. It's the system that has decided to put the criminal to death. While I don't like the death penalty, it's certainly not on the guy's head who somehow ended up as a guard on death row. And even as I don't support it, I also know that overcrowding is a problem.

I love you Hurricane!

no more than the person that administers the lethal injection.

Obviously, the lethal "injector" would be placed in the same category. The question posed is, "What is that category?"

I like to think of them as Human Garbage men. Just think about it someone has decided that they should die (thrown out) and then a person has commit a crime (littering for garbage men and murder for the gaurd) that would normally be punished but it is not in this situation. It is more a less a designed way to get rid of the people that have killed others. Once a person is sentenced to death it is quite logical that the person loses all his rights, specifically the right to life. This has a lot of holes in it I hope it is coherent.

So, would an abortion doctor fit into your Human Garbage Man scenario as well?

Nope, because the thing they are killing never did anything wrong

What an insanely inhumane way to look at people, arcane rest.

The death penalty is a relic of a barbaric era and serves no place in this modern world. It is the lowest trait of humanity brought to the fore. I'd also remind you, seeing as you're a religious person, of Romans 12:20 -- "Don't seek revenge yourselves, beloved, but give place to God's wrath. For it is written, "Vengeance alone belongs to me; I will repay, says the Lord."

I'd also like to show you this map of the world of the other countries in the world that still execute people, other than the US:

To answer Eric's question, I don't believe the people that administer this awful, awful practice are murderers -- just pawns in the ugliness that is our criminal justice system.

Lastly, if you haven't seen it, I would highly recommend seeing the film, "Dead Man Walking." Gives a little glimpse into the reality of executing someone, even if they've committed the ultimate crime.

If there is culpability and they do share in it, is it any moreso than the judge/jury who sentenced the person to die? The politicians who voted to instill capital punishment? Those in the public whose support of capital punishment makes it good politics for leaders to continue to support it?

And in this case is the fact that so many people are involved in this system allow us to defuse that moral culpability? So many are responsible so no one is more than slightly responsible.

To tell you the truth I have no clue.

I suppose "religious" people could also look at Numbers 31, where God commands Moses to destroy an entire group of people, the Midianites, including the women and children because of how the women had sexually enticed the Israelites and led them to worship false Gods. Likwise, an improper reading of that Romans passage would propose that we should not punish lawbreakers at all.

Exacting "revenge" is vastly different than executing justice. So you are correct to say that a misreading of that passage would imply we should not jail for any crime. But such a misreading would also have to involve a misunderstanding of the two concepts.

Secondly, I didn't want to get into a biblical citation war (for one can find endlessly contradictory passages), and didn't intend for my comments to be quite so visceral (though in reading them a few days later, they clearly are), so for that I apologize.

I would only suggest that exacting revenge via the death penalty is difficult for me to reconcile with the basic tenets of Christianity.

Correct, it is impossible to reconcile "revenge" with Christianity. In fact, God actually told Moses to set up cities of refuge for people to flee to when they committed manslaughter to prevent revenge from taking place. But, why couldn't capital punishment be understood as executing justice and not revenge?

You could easily argue that it is justice instead of vengeance. The question then becomes is justice better served through capital punishment than life imprisonment and is that difference enough to overcome both the moral concerns and the absolute irreversibility of the punishment.

I'd like to set aside the "irreversibility" argument for right now, even though it's obviously an important part of this discussion. Life in prison without parole and death are in essence very similar, the end of freedom for the criminal. Therefore, does one of these better represent the justice of the act of murder that the criminal produced? Also, does one of these better discourage crime?