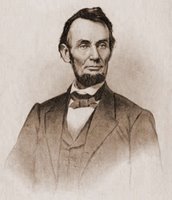 I watched a film the History Channel put out on Lincoln last night (that really made him look like a bi-polar nutcase incidentally). But, one of Lincoln's speeches struck me very interestingly when talking about slavery. He said when talking to a man from the South, paraphrased "if we could agree on the fact that a slave is not a human, but your property alone, then you would of course be free to do with your slave as you wished, but this is something that we simply can not agree on."

This struck me as very similar to the abortion debate in America today, which can really not be properly discussed until we consense one way or the other on what a human is?

...and by the way, judging from the state of South Dakota's voting to ban gay marriage but not abortion, are they really saying that they would rather their children be dead than raised by a homosexual?
- November 08, 2006
Email ThisBlogThis!Share to TwitterShare to FacebookShare to Pinterest