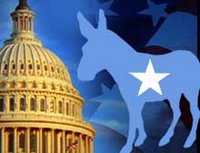 Yesterday was a historic day for the political world. The citizens of the United States said that they think Democrats can do a better job. Democrats all across this country should be excited. But, Republicans shouldn't jump off the train just yet. The current (before this new vote) majority in Congress in no way represents the conservative pulse in this country. This bastardization of fiscally liberally Republimoderates is just silly, and it's not the worst thing in the world that they're gone. Now, I think we will begin to see a shift into two new parties that better represent the country and are both fiscally conservative. These parties are the socially liberally, and the socially conservative. And that's not a bad debate to be had.
- November 08, 2006
Email ThisBlogThis!Share to TwitterShare to FacebookShare to Pinterest

Personally I refuse to celebrate losses by moderates (I was happy to see that Shays held on to his seat), but that has something to where I personally fall on the political spectrum. I like that some of the newly elected Dems like Webb (if he hangs on) and Casey seem to be fairly centrist, with Webb in particular looking like a foreign policy Democrat. I also disagree with your social policy stratification projection. If anything, it seems the Democrats are coming together more fiscally and foreign policy wise and are willing to run more socially conservative candidates in the South, West and Midwest.

Also, as a friend of mine pointed out to me, moderates help get things done. I was really saddened a few years back John Breaux retired because his ability to make things happen across party lines was clearly going to be missed. Then again, it also could have something to do with the fact that I have a soft spot for moderate, anti-abortion Democrats.

I think they are becoming more moderate, but that doesn't mean we won't be seeing items like a minimum wage hike sent to the president's desk now. While you could argue that the party's more far left factions are decreasing in power, I'd say, from what I've read, if you were to choose a random freshman Dem, that person would be more likely to be slightly right of center socially than fiscally. Maybe I'm wrong and have only been hearing about a select few of the candidates, but that seemed to be their strategy for picking up seats in the South and Great Plains regions.

Yeah, that's tough. Let's just give everyone in the country a voting button, and we'll vote each issue out truly democratically.