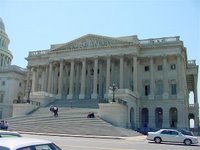 I read an article that stated that people voted for a new Congress because they were sick of the extreme right. Undoubtedly, there were many reasons why Democrats were elected in to replace the Republican majority. But, it seemed silly to me to consider the past Republican majority/President as anything close to 'far right'. Am I alone in considering this past Congress/Administration anything but conservative, and therefore thinking that this vote does not signal an American vote against conservatism, but this wacky Republipostmodernim?
- November 17, 2006
Email ThisBlogThis!Share to TwitterShare to FacebookShare to Pinterest

That's the problem with defining politics on a single axis.

I'm amused that "conservatives" are just now coming to the conclusion that beyond the "Lower Taxes! Ban Gay Marriage!" facade that the Republicans in power aren't their daddy's conservative republican party.

As Brent said, both parties are at a crossroads by trying to appease the base, but also finding themselves split into a million little factions. Both are a hodge-podge of allianced ideals that are often in conflict with each other. That's partly why a lot of evangelicals went over to the Dem side this election (in 2004, 1 in 5 voted Democrat, in 2006, it was 1 in 3) -- Republican corruption and a more progressive energy policy/willingness to address Darfur on the Dem side that many evangelicals are clamoring for.

I don't think the switch can be concisely summed up though, as either people angry about the direction of the war or corruption or to send a message to Bush. It was all those reasons, plus I think a realization by a whole lot of independents that the minority has been shut out too long and that the middle and lower classes are in dire need of some new federal priorities to address their concerns.