Women make 75 cents on the Dollar to a Man 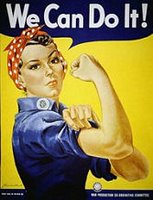 Ever heard that? I have, and was surprised that there would be such blatant gender bias when it comes to payscale in this "sophisticated" society we live in. Well, here's where that number comes from. It's not comparing apples to apples. The average women's salary is 75% what a man's is. Not with the same job, not with the same hours. Just average overall. So, what we need to remember is that men work very different jobs than a woman. Nursing and Elementary Education are the two leading vocations for a woman. Women tend to work shorter hours than the average man. Women tend to work on average, 10 years less than the average man. When you compare men and women with equivalent jobs, equivalent hours and equivalent credentials, the salaries tend to be just that, equivalent.
- November 21, 2006
Email ThisBlogThis!Share to TwitterShare to FacebookShare to Pinterest

"When you compare men and women with equivalent jobs, equivalent hours and equivalent credentials, the salaries tend to be just that, equivalent."

Do you have a source on this?

There are studies that fail to factor in the lessened financial gain due to fewer promotions -- on the surface it may appear fairhanded, but the reality is that due to the risk that working women may go on maternity leave at some point, employers are less eager to promote equally qualified women. It's a built-in form of discrimination that many might not realize exists.

So I'd be interested in reading whether that is taken into effect in your source and still proves your point.

The book I read this in does not take into account your objection, but how could it? That's a whole different issue, and an important one. But, this point was that the idea that women get paid less for doing the same thing is not valid. Your glass ceiling discrimination point is valid. Honestly, I've thought about it myself. I see women all around me quitting their jobs, because of pregnancy. And I was at a wedding a few weeks ago, and was talking to these girls our age about their jobs and their career aspirations. And they all said something to the effect, "Oh, I kind of just want to be a mother." I was actually surprised. In my head, I thought that modern women all aspired to be future Jan Levinson Gould's. So, I can see why this would be a concern for employers when making personnel decisions. But, yes, this is especially unfair to talented women who do not want to have children.