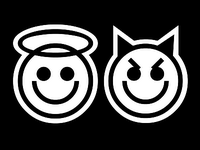 So, even if Darth Vader's motives seem righteous to him (which they tried explaining in Episode 2), it is apparent to the audience who the good guys are and who the bad guys are. So, in world conflicts today, even though the sides aren't decked out in white and black uniforms to make it easy, why is it so difficult for people to agree on who the good guys are. And I'm not saying 1 side's perfect and 1 side's morally inferior. I'm saying, when you see a conflict going on in the world, and you learn why it's going on, it should be fairly easy to see who has the best case. Why is this so difficult?
- December 29, 2006
Email ThisBlogThis!Share to TwitterShare to FacebookShare to Pinterest

here's a link to chico' blog that i always find interesting. i guess his ideas in general kinda tie into the ideas of this post. maybe not.

People simply differ over what causes they believe make starting a war just.