I Guess it Worked 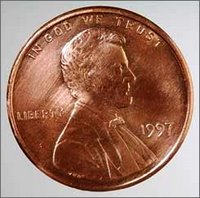 From the same History Channel Lincoln special referenced a couple of weeks ago, they also talked about Lincoln's obsession with finding some way to be remembered, which he was obviously successful in doing. Does this bother anyone else? The media was equally obsessed with this question regarding our current President's legacy, asking questions like, "What legislation can Bush push in the next two years in order to leave his mark...etc." I don't understand this. I understand the notion that everyone wants to be liked and thought of positively. But, the idea of people standing up and fighting for legislation that they don't really believe in, in order to have a positive mention is the next generation's 4th-grade history book is mystifying to me. If these people are making decisions based primarily upon how history will judge them, and not upon whether they truly believe it's the right decision or not, these people should not be in office.
- December 07, 2006
Email ThisBlogThis!Share to TwitterShare to FacebookShare to Pinterest

For instance, I think the one chance we had at any significant social security reform (maybe a two-tiered, partial privatization and a raising of the tax cap, or perhaps something entirely different) was during Clinton's second term, but the Lewinsky/impeachment mess killed any chance of it happening.