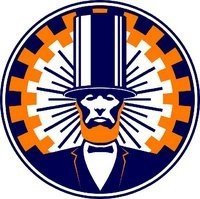 So, Chief Illiniwek is giving his last rain dance this week, and is officially retiring as the University of Illinois mascot. So, I understand the reasons behind this, but I don't understand the choosing of "offendiest". When I was in junior high, they took away our Washington Warriors mascot, and replaced him with a thunderbird. Yet, the NFL team, the Washington Redskins are still alive and kicking? Is it because the NCAA and District 203 care more about their rep than the NFL? But, then again, why doesn't the NCAA care about the Fighting Irish, insinuating that Irish people are nothing more than ugly, intoxicated midget boxers? I found this replacement idea made by some students from the University of Illinois to be an appeasing substitute. But, if they ever play any schools in the Southern Belt, we may have another Ford's Theater upon us.
- February 21, 2007
Email ThisBlogThis!Share to TwitterShare to FacebookShare to Pinterest

Amazing post on the board there about the slogan on the back of t-shirts reading hail to the chief. I actually hate this rule and think it's absurd. As I'm sure you know since its close to Peoria, the Pekin Chinks, I have no problem banning. But Illini is the name of the people of the Illinois tribe. Do we need to change our state name too? Unreal.

Do you remember Joe, from my bachelor party? the golfer? He went to Pekin High School and showed me his Pekin Chinks t-shirt. Anyway, one of my friends was the head of the group of people who tried to get the Bradley 'Brave' mascot banned. My problem with this is that he's a 20-something white male. Are they acting on the behalf of upset and offended Native Americans, or just themselves? And Justin, IF a group of Illini tribe members came public about their opposition to the mascot, would that change your view?

Sure, if there was a group of people from the Illini tribe who were legitimately offended then the issue is completely different. But the University has never (that I know of) disrespected the Illini tribe or Chief Illiniwek in fact I think the halftime performance in pretty cool and somewhat educational.

You're right, it is bizarre that something such as Warriors (which could mean any number of things) gets banned but something that actually is kind of a racial slur can live on in the professional ranks. I personally like ESPN.com columnist Gregg Easterbrook's name for them: the Potomac Drainage Basin Indigenous Persons.