The Survival of the Weakest 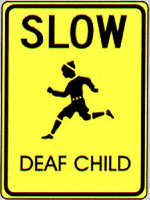 New York State Sen. Carl Krueger introduced a bill that would make it illegal to enter a city crosswalk while engaging in the use of an electronic device. His contention is that people who are listening to music, typing on their blackberry, talking on their phone, etc. are not aware of the sounds of traffic around them, and cites three recent examples of citizen fatalities because of this. Of course, by this logic, Sen. Krueger must also be under the contention that deaf people should not be allowed out in public.

In other disabled news this week, the proposed Maryland law that would promote the use of eco-friendly "hybrid" cars is being opposed by advocates of the blind, because hybrid cars are much quieter, and traffic sounds are critical for the blind to be able to get around safely. These advocates are looking to require some sort of reverse muffler for these eco-vehicles. Which goes to show you something, I'm just not sure what.
- February 23, 2007
Email ThisBlogThis!Share to TwitterShare to FacebookShare to Pinterest

liangruipeng said...
This comment has been removed by a blog administrator.
9:07 AM