Dangerous Benefit of the Doubt 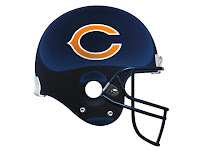 So, as a Chicago sports fan, when I see players come and go, I always assume it's for the best. The latest being, Thomas Jones, the most successful Bears rusher since Walter Payton (which doesn't say much) is now a N.Y. Jet, opening up the #1 slot in the Bears backfield for Cedric Benson. Now, I've never been a big TJ fan, and actually think that this might not be as bad of a thing as does the city of Chicago currently. But, do I think that just because I'm a fan of the Bears, and therefore, give the benefit of the doubt to the Bears Management. Similarly, when we move Cubbies around, and I disagree with a move, I say, "Well, they probably know what they're doing." Do I do that politically as well? If a guy I voted for makes a decision that seems ridiculous to me, do I jump to defend him too? Maybe I should stop giving people the benefit of the doubt.
- March 07, 2007
Email ThisBlogThis!Share to TwitterShare to FacebookShare to Pinterest

heh... I learned not to trust a Jim Hendry move long ago.

i think all of those pirates hendry got in 2003 made me think he's a genius, and i didn't question him anymore. I'm rethinking that.

well you first mistake is being a Cubs fan

the second mistake is actually admitting you are a Cubs fan

the third mistake is believing the management of the Cubs wants to win when really they know that no matter what team they field, Wrigley will be sold out most, if not all, games of the season.

What do you mean it doesn't say much to be the best runner since Walter Payton?

16,726 career yards... with NO offensive line for almost his entire career? Would Emmitt have the record without the Cowboys dynasty?

The Bears will never have a running back near the level of Walter Payton. Those Roos will never be filled.

As for Jones, I think he had a lot of promise in Chicago. I hope Benson steps up, continues to run tough and stays injury free.

And what about Briggs? He's here for another year with a franchise tag but claims he wants out claiming he doesn't like the Bears organization.

“The Chicago Bears team? The coaches, players, city and fans? Yeah, I could stay there forever. I love it. But the Chicago Bears organization? I don’t want to be there anymore. I won’t play for them and I’ll do everything in my power to keep from playing there.”

A-Train! Of course I wouldn't disrespect the greatest of all time! I was talking about being the best back SINCE Payton (including Neal Anderson, Rashann Salamm, Curtis Enis, etc.) doesn't say much.

Briggs doesn't like that the Bears organization is cheap.

In response to fellow poster arcane rest. I somewhat agree with the first two points. However, to think that the Cubs management doesn't want to win is just ridiculous. Look at the money they spent this off-season. They sign Soriano to an unbelievable amount of money and Ted Lilly, a 7th starter, to a multi-million dollar contract (which might actually pan out because AL pitchers that switch to the NL normally do better, which is why Freddie Garcia will have a great year this year). Sure Wrigley would be sold out if the Royals played there but you can't say that management is trying, at least not for this year.

Justin Elder said...
This comment has been removed by the author.
11:38 PM

should they care about winning, or winning just enough with spending the absolute minimum in order to get the highest possible profit? It's not a game after all.

Obviously they care about maximizing profit. I suppose this time around they figured that this was the best way to do it (Blow a huge amount of money in a crappy free agent market).

Now, why they didn't sign Zambrano to a multi-year deal *before* they inflated the market is beyond me. It makes as much sense as giving Perez and Rusch multi-year deals last year.