The Smoking Gun to the Head 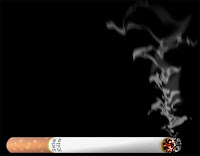 So, the issue of the Chicago smoking ban came up yesterday. And I found myself on the minority side of the battle all throughout the day, unable to convince anybody of my viewpoint. Both sides of the argument were very well addressed on fellow contributor to this project, Jeff's blog, over a year ago. So, instead of starting the debate at ground zero, read those comments, then state your thoughts. After a day straight of debating this, I think it comes down to a few simple points. Is a bar a private establishment? And if so, should the city be able to tell that owner that people can not do in that establishment something that is not against the law? By the way, the ban is already underway, so it's not about stopping it. This is just a simple exercise in thought and fascism.
- March 06, 2007
Email ThisBlogThis!Share to TwitterShare to FacebookShare to Pinterest
Labels: ban, chicago, smoking

Uh... Gov'ts tell private establishments all the time what they can and cannot do which aren't necessarily against the law otherwise. Zoning ordinances, alcohol licensing, OSHA regulations, Health Inspections/Requirements, etc.

While patrons like you and I have the choice to stay away from such unhealthy environments, the employees aren't given that choice (other than, obviously, finding another job).

1st point is excellent Brent! I hadn't heard that before, and I would certainly not be against overturning any of that legislation. Hmmm. But, since the employee chose to work there in the first place, well aware of the working conditions, I'm not sure about your second point.

I think that these smoking bans are small steps to slowly decrease the use of tobacco in our country. The tobacco lobby is huge in Washington so there is, most likely, never going to be a law making it illegal to smoke. However, these cities are making it more of an inconvience for people to smoke by making people go in certain "corners" to do so.
Typically these laws are based in the moral code of the voters on whether protecting someone's right to smoke out weighs someone's right to be healthy. The decision should be made like it is now: a city by city or town by town basis. That way if you have a problem you can take it up with the city council.

i don't think that IS the issue sean. it's not about the right to smoke, it's about the right for a private business to cater to its market. does any know the exceptions for smoking lounges?

Just out of curiosity, do you feel prostitution should be legalised? After all, its just business, right?

Smoking is not illegal. That's the point. Prostitution is, so a business can not legally sell that service.

I could be FOR making smoking illegal, and still be AGAINST this smoking ban. This isn't about anarchy (read Tommy's eloquent comments in Jeff's blog)

So in the smoking scenario you say that it's NOT okay to regulate businesses regarding smoking because smoking IS legal.

In the sex scenario you say that it IS okay to regulate businesses regarding sex even though (consensual) sex IS legal.

The only difference is that one service has been illegal for a long time with (relatively) little complaint (I'm not complaining).

Why do you allow making one service illegal but not the other?

well, you already won the smoking battle with your first comment. This debate is just to develop consistent conjecture in the future.

Prostitution and consensual sex have been defined legally as two very distinct things. One of them being illegal. My contention is that a business should not be able to offer any illegal service.

Smoking on the other hand is legal.