A Vote For Charisma 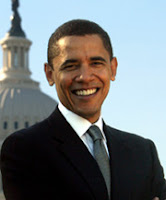 Politicians can't stand for 20 things, or for 3 things. It gets too confusing for the populace, and also gives the populace additional reasons to find something they don't like about the candidate. That's why when Bill Clinton was running for President, his campaign advisor, James Carville, made him focus on the economy. He had opinions on other issues, and you could find those out if you wanted. But, whenever Bill wanted to highlight those, Carville made him stay focused on one thing - the economy.

Republicans typically run on one of two things, lower taxes or moral higher ground. I don't think the second one's going to work too much any more - for either party in fact. I think our politicians have done a pretty good job reminding us that the human condition rests the same on all men, regardless of party line. Hilary's running on national health care. Al Gore would be running on global warming. Bush was re-elected based on national defense.

And now it's Obama's turn to choose. Right now, he's running on eloquence. It's not that he's a John Kerry and doesn't really know what to say. He has a lot of ideas, and says them often. But, he's going to have to pick one or else the populace will do it for him.
- April 05, 2007
Email ThisBlogThis!Share to TwitterShare to FacebookShare to Pinterest
Labels: obama

Isn't he, in essence, running against the current political climate? That might change as he goes on, but it seems to be one of the overriding themes. The question is, can something that soft-focus be a campaign centerpiece?

Oh, and do you really think Hillary's advisors will let national health care be her campaign centerpiece heading into the general election? That would arguably be more effective for anyone but her given what happened last time.

maybe, but there's going to be a lot of people running against the climate. He's definitely believable when he says he'll bring honor back to politics. But, i think he's going to need a higher platform to stand on eventually.

I'm not even saying that Hillary WANTS to run on national health care. I'm saying, right now, that's what voters think they'd be getting by voting her in.

Well, isn't it really all about the cult of personality afterall?

Actually, Hillary might prefer to be labeled with health care, at least in the primaries. With Lieberman not running, she might have been the Iraq War's most vocal supporter among the Democratic candidates (at least early on). If Iraq doesn't turn around fast, it will likely kill McCain's chances (fiscal conservatives don't like him because of his votes on the tax cuts, social conservatives don't trust him, and moderates, his key to success, might be turned off by his unflagging support of the war), and it might hurt Hillary too.