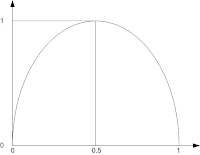 The second law of thermodynamics applies to closed systems only.

i thought the idea was that the universe is becoming increasingly chaotic, etc.

Can you explain further for us, how should I say, stupid people?

Just because disorder (entropy) is increasing as a whole, doesn't mean that in some parts of that system disorder is decreasing.

and so what is it that would cause macro (not just survival of the fittest) evolution, but rather true molecular adapatation of offspring to occur?

The mechanism behind micro- and macro- evolution is the same. The only difference is that after some mutations, the new organisms can no longer reproduce with the old ones, thus speciation occurs.

Now getting this to happen all at the same time in enough members of a species in the same location with the same mutation to allow the new descendent species to survive on their own is a whole other, more interesting question.

so, the idea behind the mutation is that it's a mistake? it's a genetic error that turns out to be beneficial?

whether the "mistake" is beneficial or not depends on the environment the organism--natural selection. mistake is kind of a loaded word to use. natural selection is non-directional.

and my question here is--of all the mutations that could occur, you would expect most to be non-beneficial. if evolution is to have occurred in a reasonable time frame (assuming even billions of years is "reasonable") shouldn't there be far more non-beneficial mutations being observed?

wouldn't the non-beneficial mutations not last though due to darwinian survival of the fittest?

i think i can wrap my head around the fact of a random mutation being positive.

But, I can't wrap my head around millions of different species mutating out of the same initial pile of goo.

Without God in any of these evolutionary equations, we run the risk of not evolving a butthole and being full of crap...

This whole notion of evolution violating the 2nd law of thermodynamics is based on a misunderstanding of what the 2nd law actually means. The 2nd law states that in an isolated system not at thermal equilibrium, the entropy (or "disorder") will tend to increase. Now, to say that entropy will NEVER increase is not correct, for the 2nd law merely states a statistical probability; at any given time, it is more likely for entropy to increase than to decrease. The word entropy describes the usable energy in a system & is NOT synonymous with the word "disorder" as we tend to use it in every day language. Entropy can decrease as long as there is a flow of energy into the system, & on earth, the sun provides much energetic input to allow these less probable events to occur. Thus, in considering the biological realm on earth, in which evolution by natural selection occurs, the earth is NOT a closed system, & entropy can decrease thanks to a constant inflowing of solar energy. While the entropy decreases in the earth's system, in the overall system which includes the sun (or the universe), the net entropy of the larger system still increases, which does not violate the 2nd law.

Now, this is also speaking in terms of energy, NOT in terms of the structuring of something. To say that a tendency to increase in entropy means that there is also a tendency to decrease in complexity is just false. We see ordered structures arising from non-ordered or less complex structures in both biological & non-living systems; think of snowflakes, gradation in the pebbles of river beds, etc. It's important not to confuse the energetics described by the 2nd law with complexity of structure.

In no way does evolution by natural selection violate the 2nd law of thermodynamics. This argument is based on a misconception about how evolution works & a misunderstanding of what the 2nd law actually means.