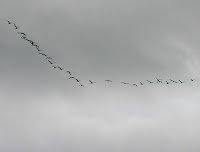 If so much of our behavior and the behavior of the animal kingdom is instinctual, then why is evolution necessary?
- May 14, 2007
Email ThisBlogThis!Share to TwitterShare to FacebookShare to Pinterest

If u were designed to evolve, i suppose instincts too would be subject to it.

so, is that the common assumption? that instinctual behavior has evolved as well?

Doesn't that go against the idea that certain behavior is innate (unlearned) within the creature?

Where do you think these ideas conflict?

but, I can look at a flock of birds in some amazing V-pattern where they all flap their wings simulataneously and take every dip and rise together as one, and be amazed.

So, for specific features that people claim have been "evolved", could one claim that those features have always been "instinctual"?

Sure, you can claim that (not saying I disagree either).

But, this would not help in a case against physical evolution adapation, correct?