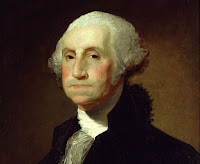 Washington signed Jay's Treaty in 1795, a treaty with Great Britain that "relinquished the right to U.S. neutrality on the seas" in hopes of avoiding further conflict. This treaty allowed any American ship to be seized and searched by Great Britain. Therefore, many were. And Britain often claimed any useful product they found on board, including any British immigrants to the United States, which they would then drag off any force them to serve in the Royal Navy.
- June 01, 2007
Email ThisBlogThis!Share to TwitterShare to FacebookShare to Pinterest

I'm sure every president has sucked in one way or another. I, on the other hand, would make a fabulous president. I can't wait to see why all the others have sucked.

You have such interesting ideas for your blog posts. I look forward to seeing what you post each day. Would you mind if I added a link to your blog on my blogs?

thank you for the kind words, jmc. i appreciate you visiting. of course, feel free to link here. i really like that barry goldwater quote you put on your site. very interesting. however, if you became president, be prepared to join my list of suck. :)

I would be happy to join your list of suck; I plan to suck in some way to everyone. :) I am a firm believer in the "you can't please everyone all of the time" philosophy. In fact, I think if everyone has some problem with some aspect what I'm doing, then I'm probably doing the job right. One difference is, if I screw up, I have no problem admitting it (actually, I'd freely and joyfully admit it; I rather enjoy self-deprecation) and moving in a direction to try to fix it. My friends and relatives can attest to that. Hmmm... I'm starting to sound like I'm actually running, in a backwards, kind of stupid, if everyone hates me I'm doing it right kind of way. :)

Are you really going to go through them all?

eventually...i'm not going to do it over the next 42 consecutive days though, if that's what you mean. Periodically, you will get a reminder of why we should not look for a perfect candidate to lead us, because he does not exist.