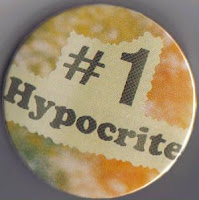 So, there is this television pundit who lives in Texas. And he espouses increased security of our Mexican border. When they covered this on the news the other night, the reporter said, "and the hypocrisy behind this whole thing is that this man is married to a Mexican woman."

Why is this a hypocrisy?

The story went on further to say, "And that's not the only contradiction in his life. He is pro-choice but AGAINST gun control."

Why is this a contradiction?

Didn't you get the memo? There are no longer to be moderate positions. You MUST be COMPLETELY nutso left-wing liberal or COMPLETELY nutso right-wing conservative. It is no longer permissible to hold varying and/or less severe views from both sides. It is ALL or NONE, BLACK or WHITE. Hold on, let me make a note here: Send Sabai the memo.

Was his Mexican wife LEGAL?

You forgot one: not allowed to be pro-life but challenge the welfare system. 'Cause then you'd only care about a child before he/she is born.

Because people like things in nice, easy to understand boxes. It goes right along with all of the red state/blue state junk that people trot out, the arguments that make it seem like everyone who lives on the coasts is a bunch of godless hedonists and that everyone in the South and the Midwest/Plains is a bunch of mouth-breathing hicks.

I can still remember someone in college being shocked that I was both anti-abortion and anti-captial punishment. Like there was some inherent contradiction.

Plus people making the arguments sometimes try to group things all the time. I still remember the group handing out flyers outside my high school. On one side was a loving Christian message. On the other side was a list of evils of gun control.