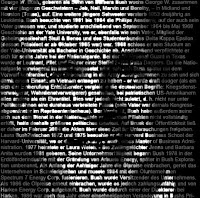 He's at a 20% approval rating, and a large amount of people would categorize him as the worst President of all time. While I attribute this mainly to an ignorance of history, it's still very interesting to me.

Because my contention is that most people do not disapprove of their current situation, but of the situation of others. For example, consumer confidence is the highest it's been in six years. Unemployment is at 4.5%, with an almost negligible real rate (the percentage of people who want to get jobs and can't attain them). It is unlikely that you or someone you know has been wrongly imprisoned due to lack of privacy enabled by the Patriot Act. And it is also unlikely, statistically, that you know someone who died in combat overseas in the last few years.

And yet, we have condemned this man based largely on what we believe to be his negligence of universal principles that we believe in, not because of how we personally have been negatively affected. That's actually commendable. Just hard to completely understand.
- August 02, 2007
Email ThisBlogThis!Share to TwitterShare to FacebookShare to Pinterest