The Endless Pursuit for Hilarity 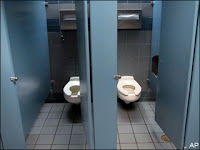 Recently, Senator Larry Craig was arrested for soliciting male prostitution in a Minnesota airport's bathroom by tapping his foot and waving his hand underneath the stall divider of a known place for obtaining these services.

A couple of days after this was made public, I decided to be hysterical.

I was in the bathroom at work, and saw a pair of shoes in the next stall over. There's only about 60 people at my company, so I sort of know everybody, and I decided to tap my foot near the divider, hoping for a laugh. None came. So, I figured he just hadn't heard the story of Senator Craig. Later that week, people at work were discussing the incident with the Senator, and I told them about my hilarious efforts.

They thought I was joking until I was able to convince them I was serious. The group was horrified. They think that now, whoever that guy was in the stall (i don't know who it is) is probably terrified of me. And they all pretty much think I'm a psycho for thinking that would be funny.

I still stick to my thought that he just must not have heard the Senator's story.

For those of you who know the story, in a semi-private place where you sort of know everybody, would this have made you laugh?
- September 18, 2007
Email ThisBlogThis!Share to TwitterShare to FacebookShare to Pinterest

You didn't know who entered the stall? I think it's hilarious, but think you're really brave for not knowing exactly who it was, you know, just in case...

I am not male, but if I was, I would have been completely weirded out... you need to find that guy and apologize so you don't lose your job!

they can't fire me! i'm hilarious! besides, how do i find the guy? send out a mass e-mail asking who i fake-solicited in the stall?