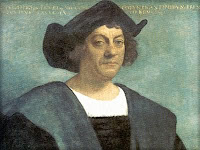 This holiday was recently "celebrated" in this country, recognizing the date on which Christopher Columbus discovered "America". Someone in my office brought in cookies that day. And someone else responded with a witty comment of how he didn't believe in eating cookies on "Indigenous People's Day". When I say witty, I mean that one other person encouraged this comment and began ridiculing Columbus, while the rest of us awkwardly managed silence.

I don't contend that we should overlook any acts of violence occurred through colonization. But, to be consistent with a Columbus hatred, we must also detest every land discovery ever made and label it as intrusion onto other's property, whether these others include people, animals or wildlife.

And I'm ok with that opinion. At least it's consistent.
- October 23, 2007
Email ThisBlogThis!Share to TwitterShare to FacebookShare to Pinterest