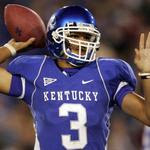 So, I was watching the LSU-Kentucky game on Saturday. Kentucky lined up, and I thought, "huh, I don't think the QB's going to be able to hang on to that snap." One second later, the ball was snapped, and botched.

Now I watch a lot of football, but never having played, I don't know too many formations. I don't really understand the intricacies, so I just assumed they lined up wrong. They showed the replay, and the announcer said, "yeah, the center just made a bad snap."

So, what just happened? What did I see? How did I know? And how often do these things happen, where we see things that just aren't right, but can't explain why? And more importantly, how can we make money off this?
- October 14, 2007
Email ThisBlogThis!Share to TwitterShare to FacebookShare to Pinterest

Go into the future and get a sports almanac from Biff...