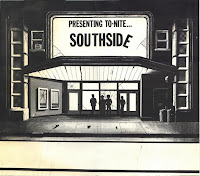 So, living in Chicago, it's common knowledge that the South side is the more dangerous part of the city. And not just because White Sox fans are weirdos.

But, recently I've also realized that when a city has more than one high school, the "CityName South" school is typically intellectually inferior to the "CityName North", even though it may possess the stronger football team.

South Carolina has a more negative reputation than North Carolina too. And what's with the phrase, "things are going South". Do we just live out the naturally negative connotation of these names, or are these just a series of coincidences based on my limited environs?

Interestingly, the word "north" has a negative connotation in Africa.

What is this? The heat? The magnetism of the equator? City building and planning patterns? Have you noticed this? Or is this the opposite where you live?
- October 02, 2007
Email ThisBlogThis!Share to TwitterShare to FacebookShare to Pinterest

Where I'm from, SOUTH Carolina, NORTH Charleston is the more dangerous and intellectually inferior. And for sure, NORTH Carolina has a more negative connotation there. More of a "Deliverance" connotation.

I live in PA now, and I like SC better. In so many ways. Pollution, traffic, and population density to name a few (all related, I know).