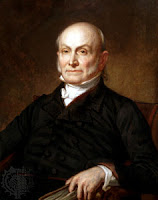 Adams was the first President to wholeheartedly endorse federal spending for internal improvements and claim the constitutional right by which to do so. This position caused a seismic shift of the accepted role of government to becoming a means by which to improve the general condition of the populace. Adams also instated a 62% tax on 92% of all imported goods to protect New England domestic industry at the cost of all other citizens. Opposers to the bill amended alternative ridiculous tariffs along with it in order for both sides to see the ridiculous nature of the bill. Instead, the bill was passed, and quickly and aptly named the "Tariff of Abominations." A revised, lowered tariff was passed 4 years later.
- October 03, 2007
Email ThisBlogThis!Share to TwitterShare to FacebookShare to Pinterest