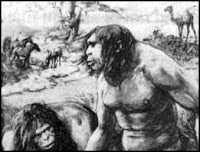 In 1917, a single tooth was found by a rancher in Nebraska. This drawing was created from that tooth. Several years later an identical tooth was found...along with the rest of the skeleton...of a pig.

There's a lot of other drawings you're probably familiar with from high school that are creatively illustrated from a couple of teeth and a femur, sometimes found hundreds of feet apart from each.

So, the question is, what incentive do these people have to creative something past what the evidence points to?
- November 08, 2007
Email ThisBlogThis!Share to TwitterShare to FacebookShare to Pinterest
Labels: evolution

Certainly there are people who want to be known for making some famous, important discovery, & in the past, there have been some cases when somebody falsely reconstructed an entire organism based on a very small element. (I would recommend checking out this short Wikipedia article on Nebraska man. The paleontologist who actually described the tooth itself (Osborn) thought the illustration you posted, which was done by some artist for a newspaper, was a load of crap.) There have even been cases of fraud in the past (see the Piltdown hoax) when people intentionally misled the public.

Looking at the fields of evolutionary biology & paleontology today, there are certainly some researchers that make a little bit more of their discovery than the ought to (though I would argue not nearly to the same degree as in the late 19th & early 20th centuries), but for every one of those scientists there are many more who are extremely critical of such discoveries. For instance, one of my advisor's former graduate students often makes grand proclamations about poorly preserved & less complete fossil specimens that my advisor is quick to critique & call out, even publicly in print or at scientific meetings.

But one point I want to make is this. The vast majority of the scientific community would not give much (if any) weight to interpretations that other researchers cannot soundly justify. It's a shame that such occurrences (such as Nebraska Man here) still sometimes overshadow the extremely well-preserved & complete fossil specimens that have been discovered & that critics of evolution (mostly YECs) often ignore in favor of bringing up what would be considered by most to be pseudoscience (or science that is greatly overstepping its bounds at best).

so, the "science" that i hear on the news...how often is that the "majority of the scientific community"?