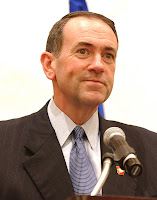 Mike Huckabee is now the national front runner for the Republican party. Why?

I was out for lunch with some people from work yesterday, and they mentioned Chuck Norris. So, I asked how many people had seen the Chuck Norris / Mike Huckabee commercials?

No one knows who this guy is. And yet, all of a sudden, he jumps to the lead? Why?

Because he's the only GOP candidate who talks openly about his faith. And apparently, that's all it takes.

But, that doesn't change the fact that this guy will get demolished in a national election.
- December 19, 2007
Email ThisBlogThis!Share to TwitterShare to FacebookShare to Pinterest

Oh, man, all this Huckabee talk has almost inspired my return to blogging. Almost.

I have to disagree with you.

Romney, Giuliani, McCain and Thompson may have some fairly significant differences when it comes to a number of national policy questions, but in terms of how they communicate, they are all cut from the same cloth. Romney's biggest problem stems not from his Mormonism, but from the fact that every time he opens his mouth he sounds like a typical Massachusetts politician.

Bill Clinton didn't get into office twice because of his brilliant policy ideas or morally impeccable background. He got there because when he communicated, he seemed like a real human being. Let's not forget that he carried plenty of baggage (i.e. long list of women claiming harassment, etc.) BEFORE winning the White House the first time. And it's not that people didn't believe the allegations, it was that no one cared. Who couldn't vote for the lovable but rambunctious little boy from down the street?

If Hillary wins the Democratic nomination, I can't think of a more dangerous opponent than Mike Huckabee. He's more Clinton than Clinton.

Also, I meant to link to this:

One of the only columnists I've seen who is "getting it right," in my opinion. Heck, I'm even finding myself disagreeing with Charles Krauthammer, and that rarely happens!

jarrett, your link didn't make it, can you resend?

I think Huckabee must think that "Average Joe" is a 6-year old then, because I feel patronized to when he speaks. He doesn't come across nearly as bright as Clinton does. And his demeanor is closest to Bush out of all the GOP candidates in an election where the Democrats are going to be looking to run against Bush.