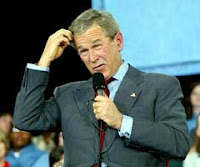 that you're NOT smarter than the President.

This, despite some polls I've seen with up to 88% of the population claiming to be.

He graduated with a bachelors degree from Yale, and later went on to obtain an MBA from Harvard University.

"Oh, but he only got in to those schools because of his dad." Maybe. But, I find it hard to believe that both schools would give him degrees by that merit alone.

He may be unsuccessful. He may be a terrible speaker. And you may be pretty smart. But, he's probably smarter.
- February 21, 2008
Email ThisBlogThis!Share to TwitterShare to FacebookShare to Pinterest

Yeah, if every stupid thing you ever did was publicized ad nauseam to everyone in the world, I would bet that most people would think that they were smarter than you too. I would.

I think 1) you're giving those schools too much credit and 2) you're not giving enough credit to the folks who didn't go to those skills cause they didn't have a rich dad who read to them as children, paid for their SAT prep classes, sent them to the right prep school and suggested they apply to the right college.