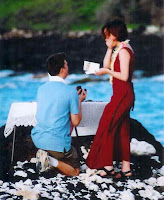 Why do men still propose on their knees?

Historically, this tradition came about from an act of desperation, a begging for an acceptance to the proposal. Today, it's used more as an act of courtesy. But, doesn't the fact that the man is obliged to do this take the romantic sincerity out of the act itself?

Most guys today don't propose unless they're pretty confident they're going to get a yes. So, while there is still a overwhelming desire on the man's part to receive a positive response, since this is the woman they have decided they want to be with for the rest of their lives, is the desperation really there for a falling to the knees? Or should we mix it up a little? Cartwheels maybe?

And yes, I did it too.
- February 20, 2008
Email ThisBlogThis!Share to TwitterShare to FacebookShare to Pinterest

Hmmm... How about a little song and dance routine?

I think it's one of those things that's romantic not necessarily because of the initial meaning but rather because we've seen it so often in that context that it has actually become a romantic gesture rather than a pleading one.

I would have gotten down on one knee, but we were outside and it had snowed the night before, so I kind of hovered my knee a couple of inches above the snow. Thankfully Lisa said yes before I had the chance to fall over.