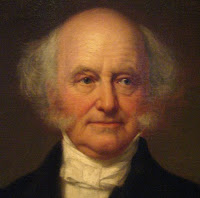 Missouri issued an executive order of October 27, 1838, known as the "Extermination Order", authorizing troops to use force against Mormons to drive them from the state because of the political threat they brought. An outspoken proponent of liberty, Van Buren ignored these citizen's rights to have theirs, because of the political consequences of doing so.
- March 31, 2008
Email ThisBlogThis!Share to TwitterShare to FacebookShare to Pinterest

Yep, he sucked. He was also known as "Martin Van Ruin", true story.

in mr. van buren's defense, he has been the hardest president so far to find a good example of his suckiness. In fact, while doing research, i've found that he is widely known as the "least bad president" of all time.

well, there are two sides to every story.

Secondly, Van Buren didn't make the order himself. He just did not stand up against it.

And what do you see as a legitimate other side to this story?

no legitimacy to the governor's "extermination order". but, there was obvious provocation from both sides, at least according to the all-authoritative wikipedia.

Yes, there was clear provocation from both sides. And this was a very different country than the one we live in now, with mobs and militias. But as far as I know provocation does not authorize murder.

fine, i'll stop defending a guy in a post where the point was to show that the guy sucked.