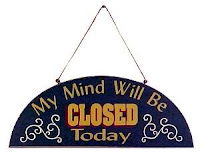 Christians are often closed-minded, right? That's a common generalization at least. But, aren't most people closed-minded? Most people think that the way they're living life is alright, in fact they would probably describe themselves as "good" people. And here's the funny thing:

Someone who becomes a Christian at some point had to come to the realization that they suck. That they are in need of redemption.

So, what happens to cause these Christians to become closed-minded?

A) Maybe these "Christians" never came to that conclusion that they required redemption - only that they discovered God for themselves.
B) They have terrible memories.
C) Maybe confidence in truth signals arrogance to the world.

What do you think?
- May 02, 2008
Email ThisBlogThis!Share to TwitterShare to FacebookShare to Pinterest

This news is significant.