Does the Story Sink or Swim? 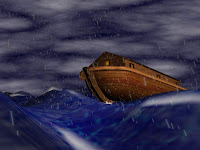 Wouldn't a catastrophic flood be more unlikely if the Jews were the ONLY people who had this story in their past?
- June 02, 2008
Email ThisBlogThis!Share to TwitterShare to FacebookShare to Pinterest

no...everyone came from the sons of noah right, so it would make sense that there was a history before of these people...then a flood, then history of the other people begins

ah ok, i see the argument now. couldn't these people have all had ancestral roots that led back to Noah's sons?