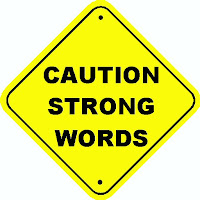 For someone in my parent's generation, feminism meant the belief that women were inherently equal in both worth and talent to men, and should not be limited from career options based on incorrect social stigmas of inferiority.

Whereas, I grew up thinking that feminists believed men were evil, stay-at-home mothers were victims and being pro-life meant being anti-woman.

I think my generation needs to watch more 50s real-life dramas (aka Mad Men) to get some perspective.

One more quick one.

Simply means liberty. And think about what that word has come to imply, both good and bad.

Words are powerful. Loaded. And dangerous. Avoid them at all costs. Either that, or think.
- August 22, 2008
Email ThisBlogThis!Share to TwitterShare to FacebookShare to Pinterest