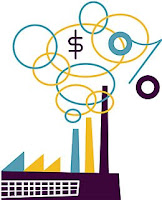 Companies aren't legally allowed to dump toxins in the ocean, because of the third-party costs associated with it. They'd be getting free disposal, while poisoning the water, affecting fish, other wildlife and humans.

So, if carbon emissions are destructive in a similar way, shouldn't this bear a financial responsibility? A $2/ton carbon tax roughly estimates the damage caused by carbon emissions. Yet, some people suggest instituting a $140/ton tax on carbon emissions because this would help curb global warming faster.

This is true, but:

A) is it right to arbitrarily tax someone that much higher than what their output is causing?
B) are the benefits worth it? for instance, we could lower the speed limit to 5 mph and drastically decrease traffic accidents, but there are costs associated with this
C) how much easier will it be to get countries around the world on board with a $2/ton carbon tax as opposed to the larger one? Because frankly, not many countries are going to be willing to accept an economic penalty when countries they compete against aren't?
- October 29, 2008
Email ThisBlogThis!Share to TwitterShare to FacebookShare to Pinterest