"He Really Gets It." 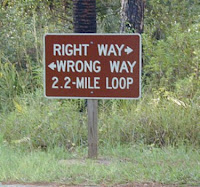 Ever catch yourself saying this when watching politicians speak?

I'm realizing that these are faulty statements. The truth is, when I say, "He gets it," what I mean is "He gets me."

He's saying the things I believe. We share a worldview, at least when talking about a certain aspect of governance. It's not that one of these guys gets it, and the other doesn't. It's that one of their voices sounds a little bit closer to our own.
- October 17, 2008
Email ThisBlogThis!Share to TwitterShare to FacebookShare to Pinterest