Let's Say Every Rumor is Right 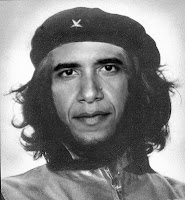 ...and Barack Obama is indeed a terrorist and a communist.

If elected, what could he actually do to pursue these desires?

Let's say he wanted to institute a Marxist command and control economy. There's no chance of any of those bills actually getting drawn up, much less, getting through Congress successfully.

Or, let's say he commands an American general to bomb the Statue of Liberty. The general has to do it, right? No, he doesn't. The general could lose his job for disobedience, but not before the President's Cabinet claims the President's mental incapacitation, and relieves him of his duties.

So, what's the worst case scenario if America elects a terrorist or a communist? If he's really, really convincing, maybe you'll get some new Departments of ___, some raised tariffs, some new entitlements, and financial support for Israel could mysteriously drop from the defense budget. But, that's about it.

The President is not as powerful as we all seem to think.
- October 13, 2008
Email ThisBlogThis!Share to TwitterShare to FacebookShare to Pinterest

You analysis assumes that the House and Senate aren't also full of terrorists and a communists.

You must be getting lazy.