The Most Powerful Person in the World 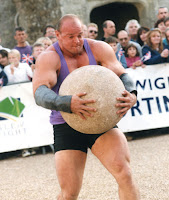 This honor is typically given to the President of the United States.
But, why?

Our President definitely has the widest sphere of influence in the world. But, take Kim Jong-il for example. While his sphere of influence is fairly limited to North Korea, his dictatorial position has led to the absolute control of the entire country, socially and economically.

Let's say I write a TV comedy show that the entire world watches. My scope is huge. But, the President of Zimbabwe slaughters 10s of thousand Zimbabweans. Smaller scope, but much more powerful.

So, while the President of the United States's sphere of influence gives him/her the most potential power, as long as they're at the head of a relatively free state, I don't think they're going to win the contest.
- November 26, 2008
Email ThisBlogThis!Share to TwitterShare to FacebookShare to Pinterest

Power from the masses behind the president. And should power only be measured by the amount of people controlled by you directly?

I am pretty sure the USA has the greatest pull good or bad in the world, and the head of the US is the president.

It's good that you write about it.