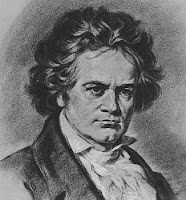 Let's say that was my response after attending a 4th grade band concert and hearing a bunch of 10-year old miscreants butcher "Ode to Joy". That would be unfair to Ludwig, would it not?

Then why would we blame religion for the perpetrations of the angry who claim to be followers of one?
- December 19, 2008
Email ThisBlogThis!Share to TwitterShare to FacebookShare to Pinterest

I am guessing that you are referring to terrorists who kill people in the name of Islam?

angry religious followers are definitely not limited to Islam.

This goes for all of them.

right... I was going to say that some pretty nasty things have been done in the name of Christianity as well

so, does Beethoven suck? or do the people trying to imitate him?

Similarly, does Christianity suck because of the Crusades? or are the people who purport to represent Christ doing so poorly?

And I'm seen people do things in the name of Christianity that are simply amazing as well.

Religion as an overall concept, no. You could, I guess, pin some of the blame on the man-made structures of some that could be argued to have allowed leaders to exploit followers for their own gains.

And while Beethoven doesn't suck, a part of me thinks "Camelot" still probably would have, even if it wasn't a high school production of it that I saw.