WNBA - The W stands for Why 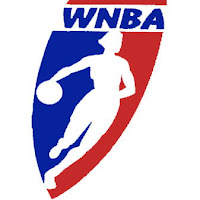 The Houston Comets, a four-time champion and one of the WNBA's original teams has shut down due to financial reasons.

My biggest question remains, "How are ANY WNBA teams still financially viable?"

Have you ever been to a WNBA game? Do you even know someone who has?

There's a reason the NBA Top 10 ESPN highlights typically consist of 10 dunks. It's because they're awesome. They're one of the main reasons the game is so exciting to watch.

Instead, during a WNBA game, the most exciting play-by-play you get to witness is a block-steal, thrown up court, where a lone woman goes up for a dynamic...layup.

Either lower the hoop to 8 feet, or kiss the league goodbye, ladies.
- December 16, 2008
Email ThisBlogThis!Share to TwitterShare to FacebookShare to Pinterest

Even though I've never watched more than the highlights of any WNBA game, I have two words for you: Candace Parker. Some examples: (1) (2) (3).

The dunk in men's basketball - a lot of sound and fury, signifying nothing.

Another interesting side note tie-in to me: she went to and played for my competing High School.

And I have the utmost respect for Miss Parker's abilities along with every other player in the WNBA.

What I'm saying is that it's not entertaining. Why would I sit through 30 WNBA games in the hopes of seeing a kindof-dunk that wouldn't make the top 100 highlight list of a single night of NBA games?

Well, you might want to watch the WNBA so you could see basketball played, not a pale shadow of the game. I've been a season subscriber since 1998, and even when my team sucks, it's entertaining.

The boys? The season lasts forEVER, they don't play hard until the fourth quarter, defense is an anathema to them... Ego-boosting may be entertaining to some, but to me it's a yawn-fest and not why I watch sports.

But, somehow, I don't see a need to call for the shutting down of the NBA. (and, have you seen how many people aren't in some of the stands? Talk about financially viable!)

The men's game has evolved (some might say de-vovled). The women's game is 50 years behind -- because competitive women's basketball was wiped out (you should study some bball history [g}). but it's growing exponentially.

It'll never have the dunk-fests you need to enjoy it, which is fine by me. But we've got physical play, speed, skill, passion, great drama.... and that's what I love.

Hey, I have an idea -- considering how much bigger the men are than they were 25 years ago, why not increase the size of the court and RAISE the rim. Now THAT might be entertaining...

For me, this post wasn't about shutting down sports I don't enjoy. It was about legitimately questioning how the WNBA could be financially viable when they have the NBA to compete against.

I guess there are probably a lot of people like you who actually prefer it. Thanks for contributing!

Speaking of how the NFL and NHL have both changed rules in recent years to promote more exciting play, are there any WNBA rule changes that might improve the spectator's time?

Part of the WNBA's problem has nothing to do with dunks, or even anything on the court. Sports tend to be the most successful when you can go beyond the die-hards and tap into the occasional viewers, and one of the things that help promote that is names. The WNBA still only has a small group of players with the requisite name recognition, partially because women's college basketball is so top-heavy that it makes the first two rounds (some might even say three) of the NCAA tourney pointless, which at the very least can't help viewership.

It's probably the same reason MLS hasn't made much of a dent (it has one mega-name who never plays). And heck, Arena Football just shut down for a year, and you can't blame that on a lack of action/scoring. Truthfully, after sitting through one af2 game, I can say I'd probably rather watch a good WNBA game than either of those leagues.

the name recognition concept is very interesting steve. i think you're really on to something there. i guess the question is, "what can a WNBA player do the earn name recognition"

dunking was how parker did it :)

Parker was also a completely dominant force. She would have at least been at the same level as Sue Bird and Holdsclaw (sp?) entering the WNBA even if she never dunked. The problem is, you typically only get one, maybe two of those per year entering the WNBA.

I still say the issue is two-fold. The first is women's college basketball isn't as interesting nationally because the same teams are always there. You almost never get a Davidson-type story, diminishing interest in the women's NCAA tournament. It's the reason I'd bet (pure conjecture) that the WNBA teams that do the best are the ones located near the major college powerhouses, where fans are used to getting excited about women's basketball.

You also have the vicious cycle where women's sports got a later start then men's, so they didn't have the already-built-up fan base. Therefore, they didn't get as much coverage or attention. Therefore there was less of a chance to grab people's attention and build up a fan base and create these well-known stars. It is probably one of the reasons that tennis is one of the most popular women's sports. It has been part of the sports landscape for a long time and had memorable personalities that conditioned sports fans to pay attention to it.

yup, and i have no idea who those others are that you mentioned.