How to Believe: Part Two 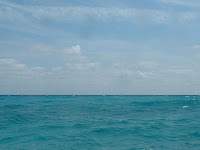 Some people have experiences they can not explain, that they attribute to the supernatural. Now, we obviously have to be careful about this, but I am merely stating that this is one of the reasons people come to faith.

Years ago, my mother was in the Grand Cayman Islands accompanying my father on a business trip/vacation. She decided to go snorkeling and was simply amazed at the beauty she saw. So much so, that after an hour of swimming with flippers, she poked her head out of the water and realized she had no idea which way the coast was. She was so far out that she could no longer see any land. Immediately she began to panic. And just then a surfer came by, paddling on his board and asked her if she was ok. She explained the situation, and he told her not to worry and he swam back to shore with her. After a while, they reached the beach together. Exhausted and grateful, my mother turned to thank him once again, and he was gone.

She doesn't know how to explain it. So, she attributes it to an angel, because that's the term that pops into our heads when we hear of stories like that. But, whatever it is, she is convinced she had a supernatural experience. And that has helped her to believe.
- January 13, 2009
Email ThisBlogThis!Share to TwitterShare to FacebookShare to Pinterest

So...(and by the way, I love this story--I'm scared just reading about being stranded in the ocean) the difference between this and believing in Santa after seeing the sleigh tracks is that in this case, she has decided to believe in an angel for more than the fact that she physically saw him.

this is another example of a sleigh track.

sleigh tracks in the yard ARE evidence for the existence of Santa Claus. It's only when someone else fesses up to making them that the theory falls apart.

But, if I find out that the man who helped my mother quickly ran away after helping her back to shore, or that my mother is simply delusional altogether, then this evidence for the supernatural becomes worthless.

But these "supernatural" experiences are enough for some people to be convinced that there is something more than the natural world.

So let's assume she's not delusional. And that you could actually somehow prove that he had been a human who saved her and then ran away (or was promptly eaten by a bull shark).

Wouldn't she still believe in him the way she does now? Because it is her belief, and not something she was fooled into, but something she came to on her own? And, who would you be to tell her what it was or was not? If you weren't there? So can we ever really disprove something like that? (I know you can disprove the sleigh tracks because they were intentionally created to fool a child.)

PS: When I imagine this scenario, the angel is Patrick Swayze from Point Break.

so, this week, we're talking about common "entry points" to belief.

Through other experiences, she has come to a more sophisticated set of beliefs as to who God is. And therefore, she attributes this supernatural experience to him, believing it to be in his nature (as much as she knows) to set up something like that.

A supernatural experience that you can't explain away is simply one entry point for people into consideration of the divine.