What Are We Doing Here? Part One 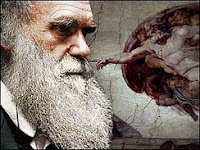 Richard Dawkins, one of the most prominent voices in the atheist movement has written a very popular book called "The God Delusion", in which Dawkins aims to prove how the world we see today could be created through naturalistic means.

These naturalistic explanations are very compelling, fleshing out Darwin's theory based on the newest science available to us.

But, this only takes us to a point. The point in which everything came out of nothing.

In a recent interview of Dawkins, the journalist didn't try to make the mistake of picking apart Dawkins' science from a completely uninformed perspective, but instead asked where this first "life" came from that naturally replicated and evolved over time into the world we see today? Dawkins could not answer, because it is not something that science can tell us, at least not yet.

The origin of species does not explain the origin of life itself.
- January 05, 2009
Email ThisBlogThis!Share to TwitterShare to FacebookShare to Pinterest

I would say the main aim of The God Delusion is not to "prove how the world...could be created through naturalistic means" (Dawkins assumes this) but rather to convince the reader that the question of God's existence is a scientific one and that science has essentially 'proven' the non-existence of God.

As for the origin of life, I would agree that science--right now--does not have a good answer. However, there are a number of competing theories--all with their strengths and weaknesses. But does it really matter if science can explain it or not? I would not be surprised if at some point in the future, the scientific community does come to a consensus on how the first life forms evolved from 'non-living' matter. If we actually understand how this physically/chemically transpired, does that mean that God had nothing to do with it? I would argue not. It's this type of God-of-the-gaps argument that people like Dawkins prey on, pushing God out of the picture as the gaps in human knowledge shrink. As Christians, we shouldn't feel threatened by new scientific knowledge--we should rejoice when we understand something new about how God's world works and how we came to be here.

totally with you on avoiding the "gap" proof for the existence of God. I guess I didn't think of the creation of the universe as a gap though?

I'm not a physicist/cosmologist, so my understanding of all that went on during the Big Bang is cursory at best, but I can say that the Big Bang has really nothing to do directly with the origin of life. It has to do with the origin of matter. How exactly that works is out of the realm of my expertise--it has to do with converting energy into matter and antimatter or something like that. Of course, figuring out where that energy came from can easily lead to the famous infinite regress of causes, resulting in some 'unmoved mover' which many people say must be God (Dawkins addresses this argument in The God Delusion too).

The 'gap' that I was talking about is the origin of life on earth, which is a completely separate question from the origin of matter in the universe. There are many theorists with ideas about how life developed from non-life, but there is no general consensus as to which chemical pathway(s) most likely brought it about.