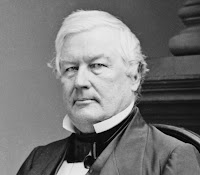 Always the political pragmatist, Millard Fillmore took office after the death of his predecessor, Zachary Taylor, and quickly ushered in the Compromise of 1850. While the goal of the act was to settle the slave controversy, the Fugitive Slave Act contained in the bill which provided the federal government with legal claim to send freed slaves back to their Southern masters, did nothing of the sort and only stoked flames on the fire of secession.
- January 27, 2009
Email ThisBlogThis!Share to TwitterShare to FacebookShare to Pinterest