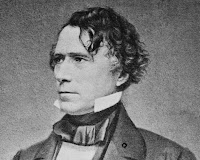 Happy President's Day! In honor, we're going to continue our study of Presidential suckiness all week.

Because the nation of Cuba was so near the United States, Franklin Pierce decided that he should be allowed to take it from Spain, its current and distant owner. The Ostend Manifesto declared his desire to purchase Cuba for $120 million, and threatened that a refusal to sell would justify the United States in "wresting it from Spain." While some critics saw this simply as a ploy to add power to the Southern states, others were shocked at the total affront and disregard for international law.
- February 16, 2009
Email ThisBlogThis!Share to TwitterShare to FacebookShare to Pinterest