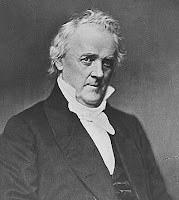 While elected by many out of hope he would be able to bring about the unity necessary to permanently prevent Southern secession, Buchanan himself gave up this prospect after his inability to convince the North of the South's constitutional rights nor properly warn the South of the consequences of secession. He made it clear that he would not seek a second term, and the country resigned as well, knowing that secession was well on its way.
- February 17, 2009
Email ThisBlogThis!Share to TwitterShare to FacebookShare to Pinterest

recently voted as the worst president of all time

this dude sucked. no doubt about it.