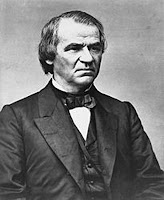 In 1867, Johnson vetoed the Tenure of Office Act, which would forbid the President from removing certain public officials without Senate consent. His veto was overridden and the act became law. Johnson refused to accept this decision and dismissed his Secretary of War, Edwin Stanton, for undermining his policies. He underestimated the Senate's willingness to allow blatant affronts to Federal Law, however, and he was quickly impeached.
- February 19, 2009
Email ThisBlogThis!Share to TwitterShare to FacebookShare to Pinterest