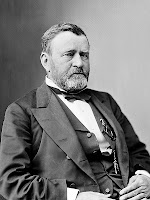 Grant came into office with extreme popularity as the general who led the Union to victory over the Confederate States. Once there, he decided to fill his cabinet based on friendships rather than qualifications. While far from the only President to do this, the sheer amount of abuses and corruption committed by these appointees not only under his watch but his awareness bewilders historians to this day.
- February 20, 2009
Email ThisBlogThis!Share to TwitterShare to FacebookShare to Pinterest