Hollywood Has Turned on Us... 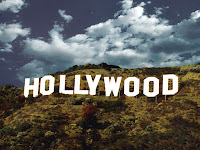 ...because no one is as smart as the people they make in movies. And Hollywood has ruined us in our anticipation of what we believe the White House, the CIA and local law enforcement should be capable of.

You know how they found Jason Bourne in about 12 seconds using global satellite tracking technology in the first Bourne Identity movie? More than eight years later, we still don't know where Osama bin Laden is. So, put down your "Martin Sheen for President" and Jack Bauer for "Head of CIA/Torture Information Getter" signs. They don't really exist.
- April 23, 2009
Email ThisBlogThis!Share to TwitterShare to FacebookShare to Pinterest

If Jack Baur were head of the CIA/Torture Information Getter, we'd already have Osama Bin Laden! Seriously, my husband doesn't understand why our computer doesn't have the capability and speed of movie computers. But I guess if movies were like life, they wouldn't thrill us like they do.

yes! those translucent touch screen computers! i totally want one, too.