It's all the Same god 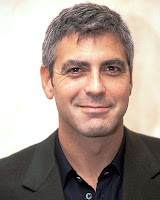 Since we haven't talked about George Clooney in a couple days, I thought I'd use him in an analogy today. Often, people act incredulous about our religious divisions in the world, claiming, "We're all worshiping the same god anyway, no matter what we call him/her/it."

Here's my problem with that statement.

We can all believe in "George Clooney." But the man I described isn't him, even though we call him the same thing.
- April 24, 2009
Email ThisBlogThis!Share to TwitterShare to FacebookShare to Pinterest

But one of God's attributes is undefinable right?

you've got to keep going.

But you can prove clooney isn't paraplegic. So we can agree there is only one george clooney, but I can prove you are wrong when you say those things. You cant prove or disprove anything about god. If all these people assume there is only one god and that they are praying to him, then logically, they can all assume they are praying to the same god.

whether or not you can prove specific characteristics of God, by definition, these gods defined by various religions are incompatible with one another, and therefore, it's not the same god.