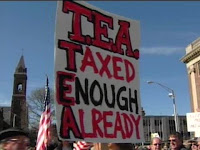 Now, I understand that if you're a big fan of the current President, you're going to have an aversion to the tea-party tax protests that went on the other day.

But, the sheer incredulity I heard from several "journalists" yesterday who couldn't understand why people other than those in the very highest tax brackets would care about a tax hike that didn't directly affect them...infuriated me.

By that logic, a white person fighting against slavery would make no sense, either.

You stand up for something because it's wrong. Not just because you'll get something out of it.
- April 17, 2009
Email ThisBlogThis!Share to TwitterShare to FacebookShare to Pinterest

I was just appalled that people have been throwing around the term 'teabagging' without any knowledge of what that means in the modern vernacular.

they know exactly what it means. why else would they use that phrase? it's not really related.

Honestly this was kind of embarrassing for conservatives.