Movies are Better than Books 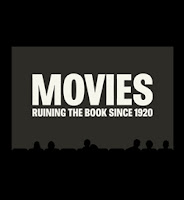 I'm taking it a step further than last week, and claiming that movies are inherently greater than books.

I know what you're thinking. Books allow you to imagine. Well, movies can too. It's just that the director too often uses the visual dimension to give stuff away, and make it easier for us. But, they don't have to. What if they could do what great books do, but by using a whole new realm of visual communication, too?

Shakespeare wrote his plays to be acted. Cadence. Delivery. Eyebrows. Movement. All adding up to more than the words alone.

And movies can go even further. The narrator now has the control of your eye. Giving you new perspectives, clues.

Video is simply a broader medium than the written word. There's more that can be done. I've seen glimpses of it already. And as directors get better about using it, it's going to be amazing.
- June 23, 2009
Email ThisBlogThis!Share to TwitterShare to FacebookShare to Pinterest

The Bible: The Movie
Written by God
Screenplay by Michael Crichton

Secondly, congrats to you and Fallon on becoming parents and welcoming little Everit into your lives!

Thirdly, I'm glad you still have your priorities straight and are continuing to comment here. :)

I've said it before: