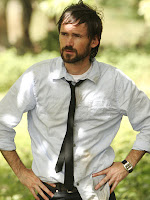 You ever catch yourself wondering how seemingly intelligent people can believe the world is only 6,000 years old?

It's the same reason Daniel Faraday's explanations of time travel and spontaneous island movement on LOST kind of make sense when he tries to explain it.

This postures him as an authority figure. And he's a scientist, which means he knows more than you do. That's all it takes. There are in fact "scientists" who believe in a young-earth, and that either our current dating systems are flawed or that the earth has "appeared" age.

If you hear one of them talk, and they're wearing a tie, you're going to believe them, as long as you've never been presented with a more compelling argument from another tie-wearing scientist. And for those who believe the Bible to be true and hold to an ultra-literal linguistic view of the Creation story in Genesis, it's easier to reconcile this belief with a 6,000 year old scientific earth. And so, they're ok with it. After all, a "scientist" believes it.
- July 07, 2009
Email ThisBlogThis!Share to TwitterShare to FacebookShare to Pinterest
Labels: daniel faraday, lost, young-earth creationism

Oh, those cute young-earth creationists. They make me smile at their cuteness...then frown 'cause they are so dumb.

i'm not sure whether to take your word on that or not...what are you wearing?

I think the heirarchy of trust goes:

actually i think you left out top hat... it's:

exactly! that's why we all think peanuts are good for you when they're really not!

Do we need to know what's in the pipe? I mean, it's second on the list, so I'm just wondering.