Being Andy Roddick in a Roger Federer World 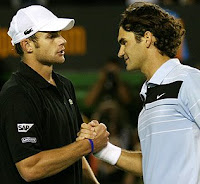 Name an NBA player who played during Michael Jordan's prime that you consider one of the best players to ever play the game.

Is that a coincidence? Magic and Bird were too early. Kobe and Lebron, too late. Ewing, Drexler, Malone, Robinson. Is that who we're left with? I mean, Dream Teamable, yes. But, what's with the huge talent drop off?

It makes me curious if the elite guys we think of like Magic, Bird, Kobe and Lebron are actually in his class at all. We don't really know. We assume they are because they're the best in their time. Maybe they're better, and Jordan just got lucky with the time he was in the game. And because of that, we give him the front spot in the best-of-all-time rankings.

Without Roger Federer, would Roddick be considered one of the best in the game? Would he have a half dozen major titles?

Just goes to show you that if you want to win, you better be born in the right year.
- August 04, 2009
Email ThisBlogThis!Share to TwitterShare to FacebookShare to Pinterest

Ouliers seems to be the cause for this post....amazing book