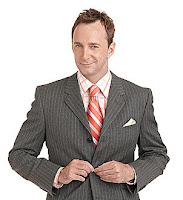 I was recently discussing the TLC show "What Not to Wear" with a group of people, when an individual began arguing against the obvious fact that the male fashion guru on the show, Clinton Kelly, was gay.

I have experienced this many times in work environments with new hires as well. Same thing with American Idol runner up, Adam Lambert, this past year. Some people seem bent on ferociously denying the possibility.

It's not that I don't see the harm or unfairness in quick generalizations. If these deniers simply reminded me it's none of my business, they'd be right, and I'd shut up. It's just the loud and adamant denial that confuses me.

Every time in high school or college, when I thought a kid was gay, if they would deny it, I would absolutely believe them. Since then, each one has come out. The lesson I learned, right or wrong, was that if you think they're gay, you're right.
- August 27, 2009
Email ThisBlogThis!Share to TwitterShare to FacebookShare to Pinterest